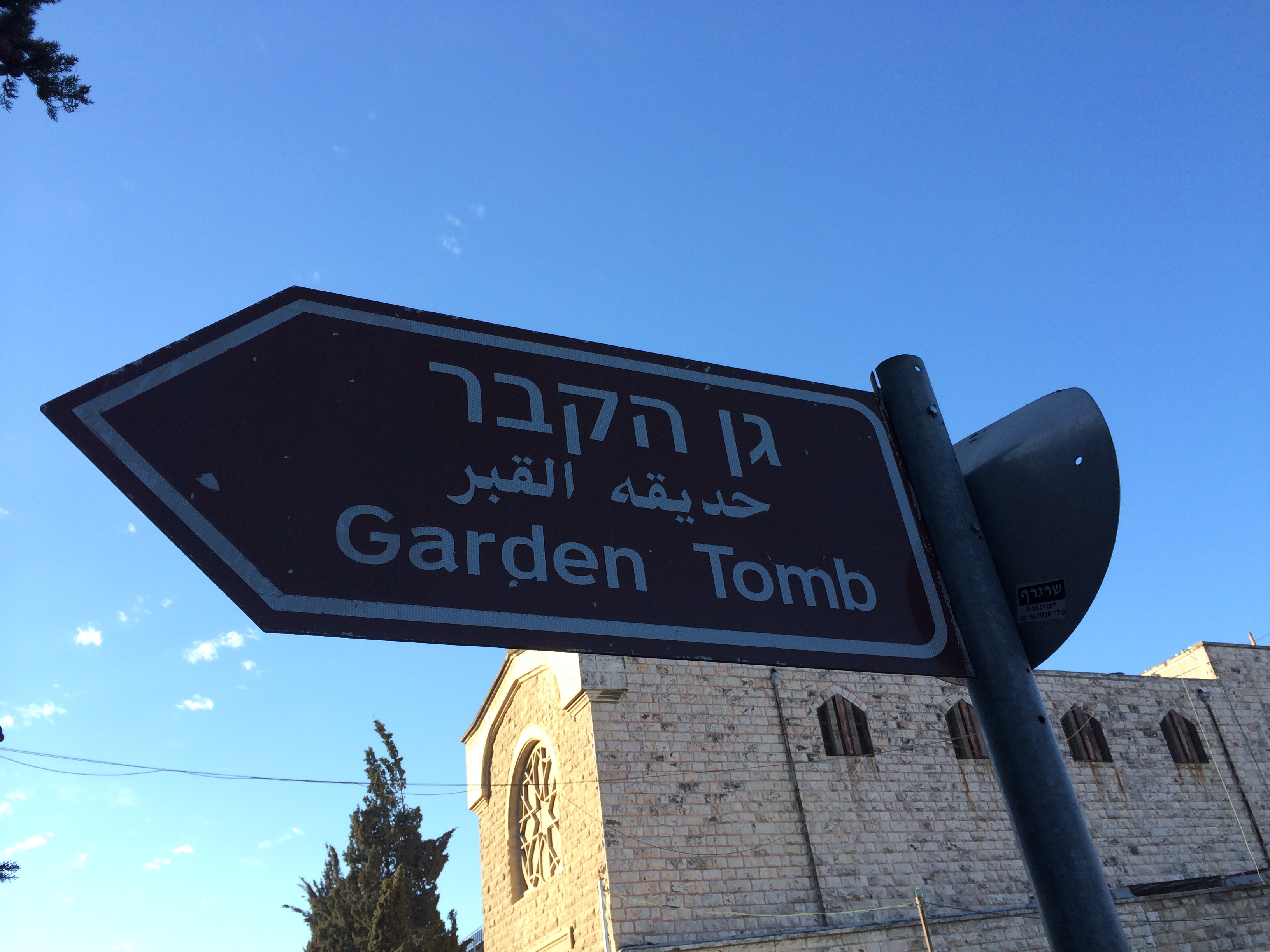 This is the sixth part in a multi-post description of my recent visit to Israel. To start from the beginning, go here.

The morning of our fifth day was started early so that we could get to the Garden Tomb, one possible location of Jesus’ tomb, before the rest of the public would arrive and make our video shoot impossible. 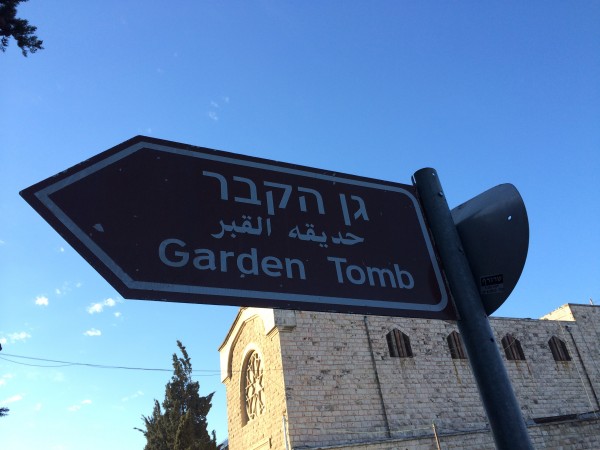 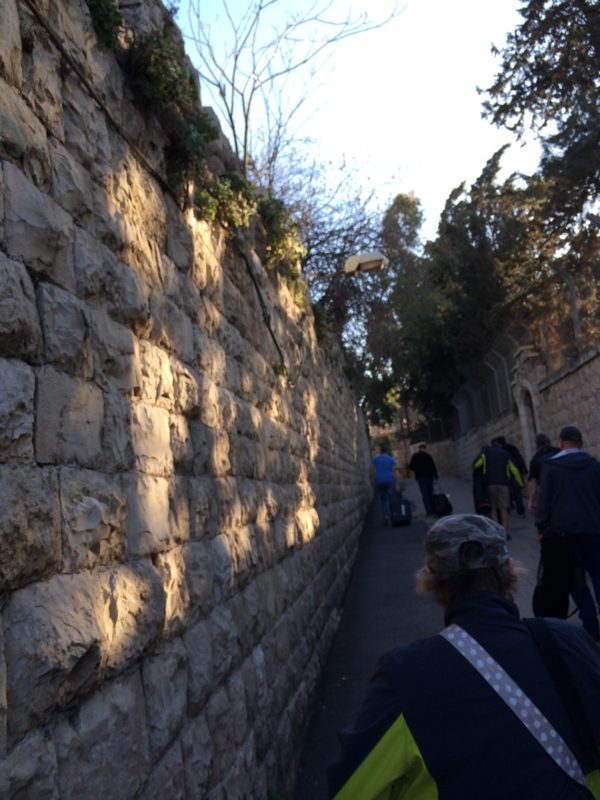 Up the path to the entrance to the Garden.

Inside the Garden. The entrance to the tomb is in the middle of the screen above. 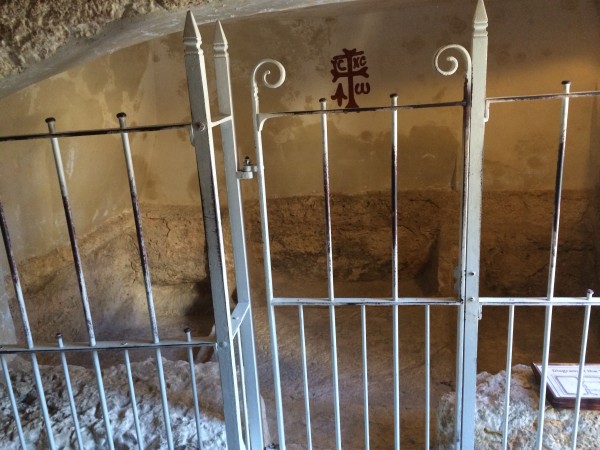 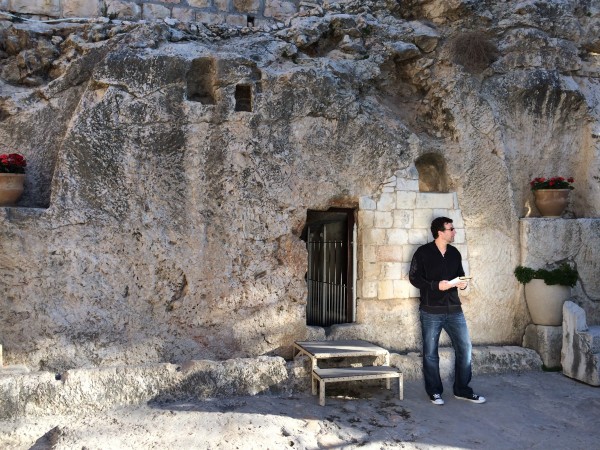 Video of setting up for a shoot at the Garden Tomb. 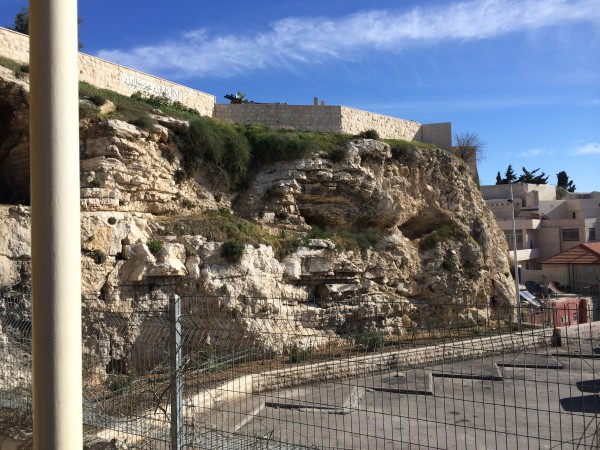 From the garden, we also had a view of the area that could be the location of the crucifixion – Golgotha.

Leaving the Garden Tomb, Chad Funk and myself split off from the rest of the group to visit the City of David, the oldest part of the city, and in particular Hezekiah’s tunnel.

King Hezekiah built this aqueduct, channeling water into the city, in preparation for an Assyrian attack after he refused to pay tribute. Biblical mention >> 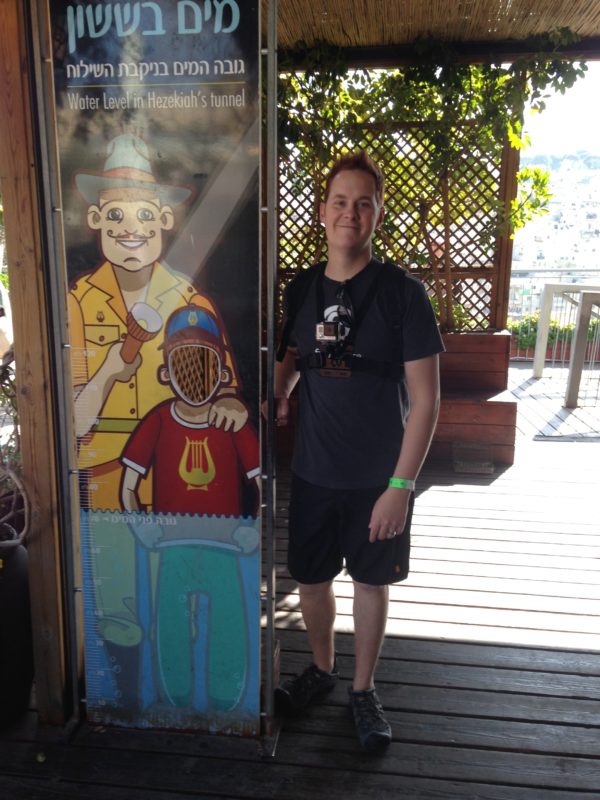 Here I am, with a GoPro harness strapped to my chest. This was one of the things on my wish list for the trip, and I was fired up that we were able to make it work. 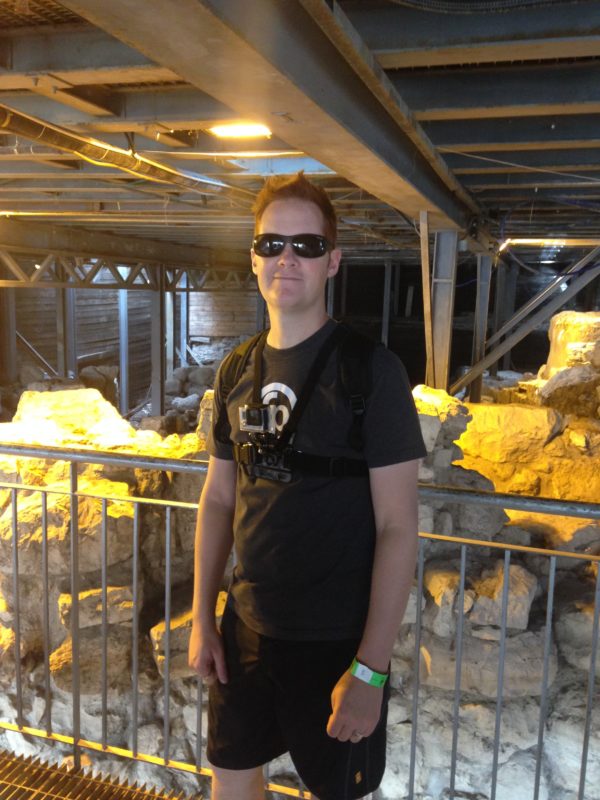 Standing in the area that many believe to be the ruins of David’s palace. 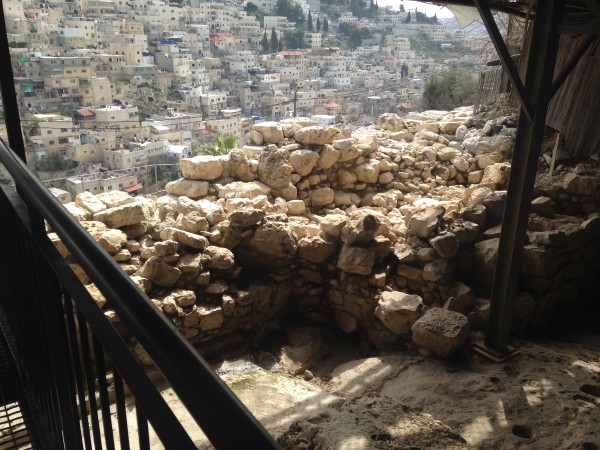 Another view of the palace ruins. 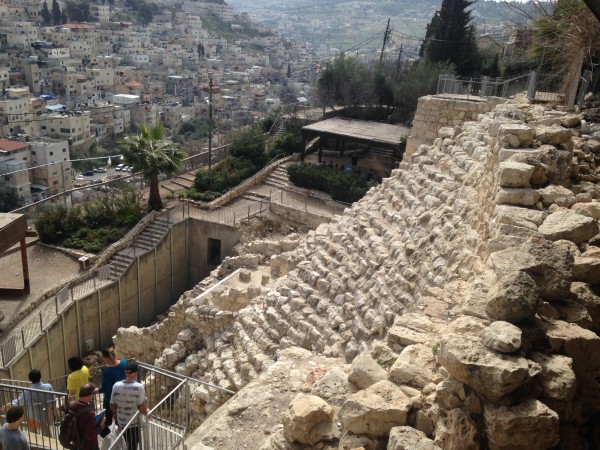 Headed down to the aqueduct.

I still haven’t seen my GoPro footage, but here’s someone else’s video

I decided not to risk destroying my iPhone, so thanks to Chad for these photos.

Once we made it through Hezekiah’s Tunnel, we hiked back up the hill to our pick up location and then took the van back to meet up with the rest of the crew. 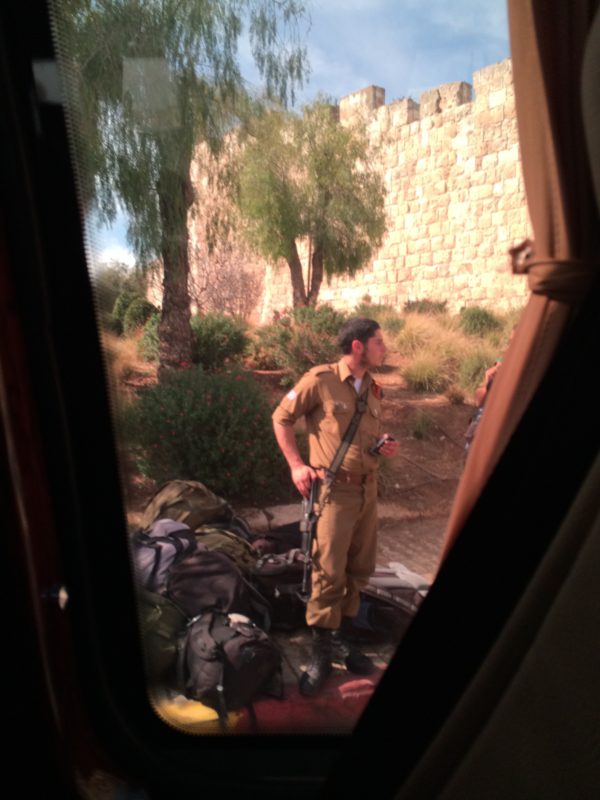 Throughout our trip we saw hundreds of men and women from the Israeli Army. They were aways carrying rifles, even when celebrating the Sabbath at the Western Wall.

We met back up with the rest of the team just as they were packing up from a video shoot.

Quickly scoping out a room that may be where Jesus’ Last Supper took place. 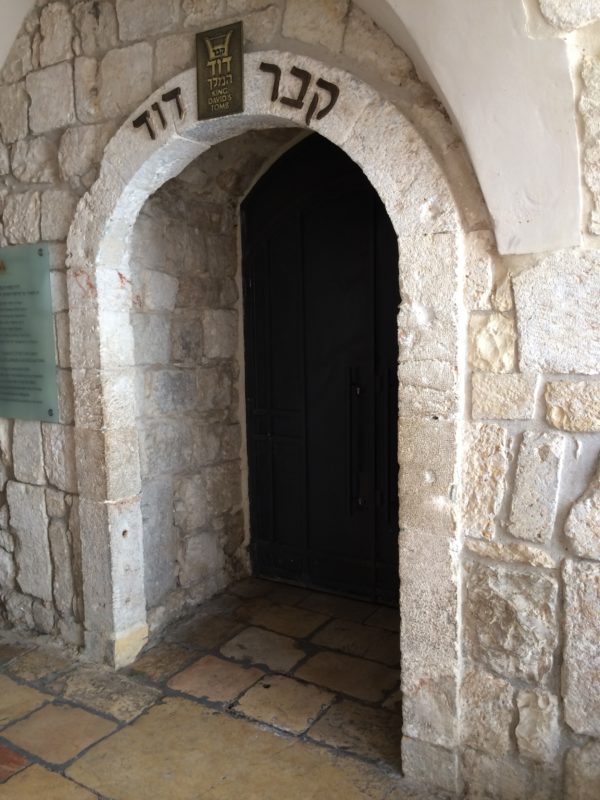 Close nearby is also King David’s Tomb. As with many other locations like this and the location of the Jesus’ Last Supper, it’s difficult to know if this is the original location, but whether it is or not it is exact, they still serves as memorials to the events/locations. 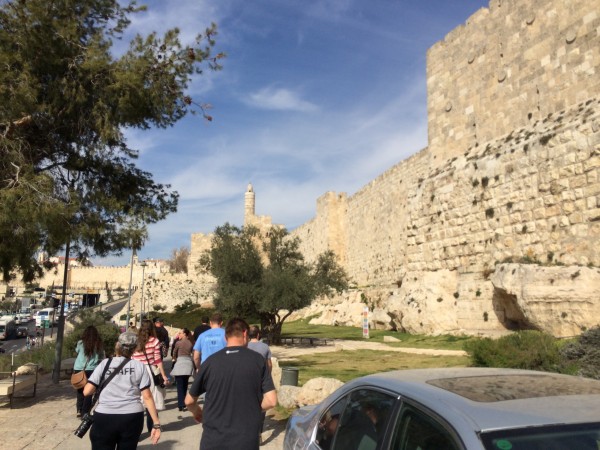 Walking along one of the walls of Jerusalem. 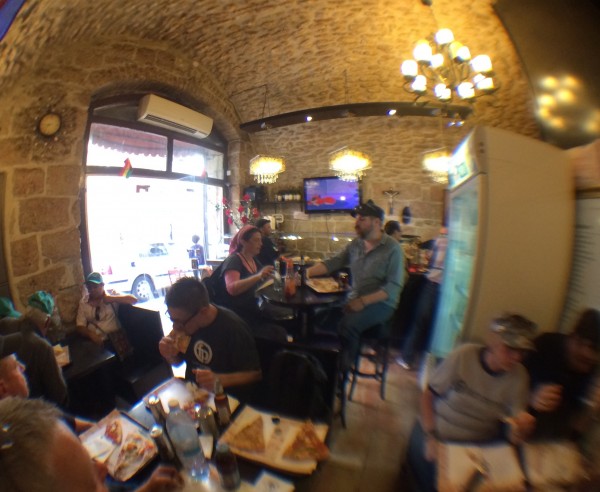 After lunch, our Jewish tour guide quickly lead us to our accommodations for the evening, a nice hotel called the Inbal. It was Friday, and the Jewish day ends at sundown, so she was hurrying to get home for Shabbat (Sabbath in Hebrew).

Shabbat is a very big deal (along with dietary laws) for many of the religious Jews, and as Shabbat grew nearer, the standard greeting of Shalom (Hebrew for peace) was replaced with Shebat Shalom. 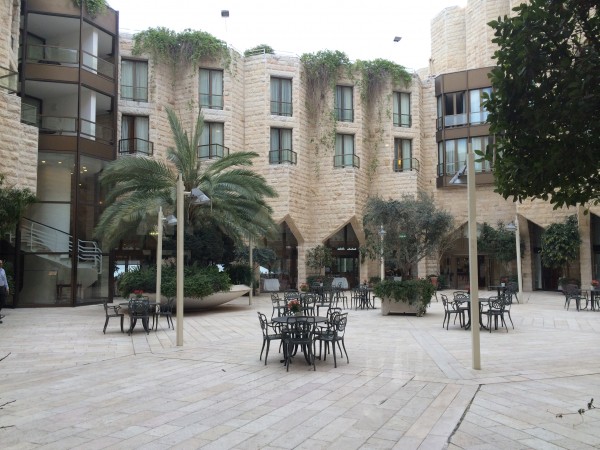 The courtyard of the Inbal – where we had breakfast the next morning.

Most of our team decided to go to the Western Wall to celebrate Shabbat, so we hired a taxi and made the short drive from the hotel. 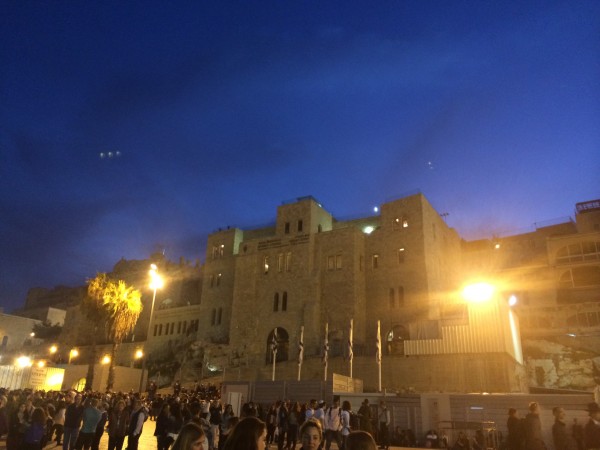 Looking back up at the building where we had been on top of when we first saw the Dome of the Rock and the Western Wall. 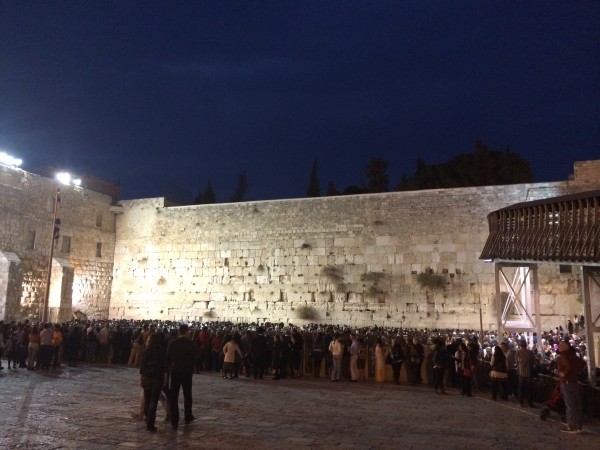 The gathering of people at the Western Wall. The group you can see in front of us are the Gentiles, and they are all looking over a temporary wall at a much larger crowd of Jewish people, divided between men and women who are worshipping there. Many are praying at the wall – often writing down requests on small pieces of paper, rolling them up, and tucking them between stones on the wall. Others, including many from the Israeli Army are huddled into large circles, each singing their own selection of songs. Some of the people in the circles are jumping up and dancing in celebration.

I don’t remember who from our group decided we should do it, but Michele headed over to the women’s side on the right and approached the Wall, mingling with the Jews, and each of the men grabbed a yarmulke (see types and variations), the head covering that Jewish men wear, and we joined the Jewish people on the left side. One of the best spontaneous decisions of the night. We were still spectators, but we were in the middle of it all, and we crowded in around one of the big circles just like hundreds of others were doing.

Because of Jewish oppression worldwide, they do not allow photography or video at the Western Wall. But here’s a good example I found from a Google search. 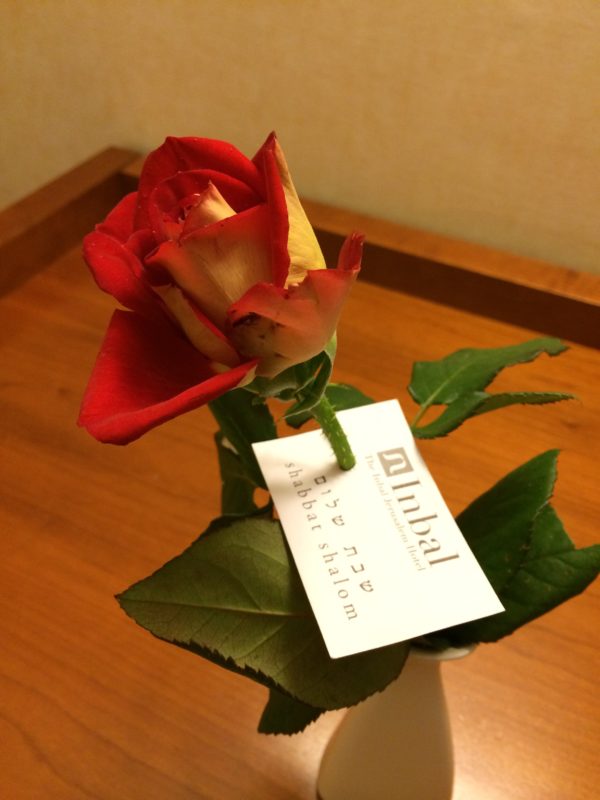 Back at the hotel, this had been left by our hotel staff.

After a huge and delicious meal at the hotel, we carted ourselves back to our rooms to rest before our final day in Jerusalem. (Part 7)

One thought on “My Visit to Israel (Part 6)”