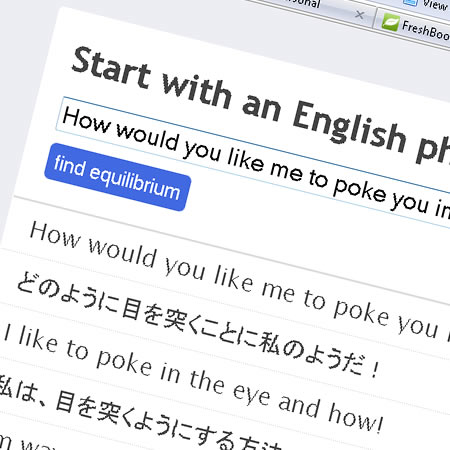 I thought it would be cool to mention a few web applications that I’ve found to be especially useful over the past few weeks, but I think I’ll save that for tomorrow.  Today, instead, I want to mention a useful hilarious web program that had me laughing like a fool at my desk today.

It’s called Translation Party, and what it does is take an English phrase and convert it to Japanese using Google’s translation API.  Then, it translates the Japanese back to English.  It repeats the process until the two phrases match in English and Japanese (“equilibrium”).  Google’s translator is good, so sometimes nothing too interesting happens, but sometimes it gets pretty funny.

Here’s a couple that turned out pretty good: